Welcome!
Close
Would you like to make this site your homepage? It's fast and easy...
Yes, Please make this my home page!
No Thanks
Don't show this to me again.
Close
1992 29¢ Theodore von Karman Stamps Scott #2699 <![endif]-->
Exploring Space Stamps and USPS Stamp Collection

Explore with us the fascinating world of space travel and exploration documented and displayed through the stamp issues of the United States Postal Service. Pictures of stamps, first day covers, and information about date of issue and background history of the historic space event depicted on stamps.

Space travel and astronomy have inspired many U.S. postage stamps, beginning with two stamps in 1948 - one honoring an early U.S. rocket launch, the other Mount Palomar Observatory. But it was not until the dawn of the space age in the late 1950s and early 1960s that space stamps really took off, celebrating American progress with stamps commemorating early satellites, rocketry, Project Mercury, Project Gemini, Apollo missions to the Moon, and numerous planetary probes.

Today's space stamps include contemporary images of the space shuttle, the International Space Station, and photographs taken by the Hubble Space Telescope, as well as commemorative images of classic space achievements. The single most popular historic subject remains the Apollo 11 Moon landing.

Rocketry - The basic science behind modern space travel is rocket science - the use of incredibly powerful propellants in large quantities to launch manned spacecraft or unmanned satellites or planetary explorers into Earth orbit or beyond. Rocket science dates back to the German rockets of World War II, but was pursued vigorously by both the U.S. and the Soviet Union after the war, eventually making space travel possible. There have been three U.S. postage stamps related to rocket science, including two honoring early scientists in this field, Robert H. Goddard and Theodore von Kįrmįn. The rocket-powered Bell X-1, included in the Air Stamps section above, was the first plane to break the sound barrier.

Unmanned Explorers - Just as manned space missions have explored Earth orbit and the Moon, numerous unmanned explorers have explored the solar system, including seven of the other eight planets and a large number of moons, including our own. A variety of U.S. postage stamps have honored these missions; one stamp also depicts Pluto, the farthest planet and the only one not yet explored by an unmanned craft.

Space Shuttle - Unlike previous manned U.S. spacecraft, the space shuttles were intended to be brought back to Earth and reused many times. The reusable shuttles were intended for tasks such as launching and servicing satellites, performing near-zero-gravity scientific experiments, and transporting crew members and major components to the International Space Station. Although it has performed all those tasks, the shuttle program has also experienced two major disasters, with the loss of the shuttle Challenger in January 1986 and the shuttle Columbia in February 2003.

Space Stations - The U.S. established its first orbiting space station in May 1973 with the launch of Skylab. During the following year, three different crews of three astronauts each visited Skylab for missions of between 28 and 84 days. Skylab remained in orbit until July 1979, when it reentered the Earth’s atmosphere, disintegrating over Australia and the Indian Ocean. There are two U.S. postage stamps depicting Skylab.

Beginning in 1971, the Soviet Union successfully launched and operated a series of seven space stations. The final station, Mir, was launched in 1986; it remained in active use until 1999 and was scrapped through de-orbiting in 2001. A rare U.S. postage stamp image of the Mir space station may be found in the 1992 stamp shown here.

The 16-nation International Space Station, depicted in two U.S. holographic stamps, has been under construction in Earth orbit since 1998. It has been continuously occupied since November 2000 by American astronauts and Russian cosmonauts, as well as shorter-term visitors from other nations. In addition to the United States and Russia, nations involved in this U.S.-led project include Canada, Japan, Brazil, and 11 member nations of the European Space Agency.

Earth from SpaceAstronauts have often commented on a stunning sight never seen by human beings before the 1960s: the planet Earth as it appears from space. This image has been the subject of two U.S. postage stamps, including one of the first U.S. holographic stamps. 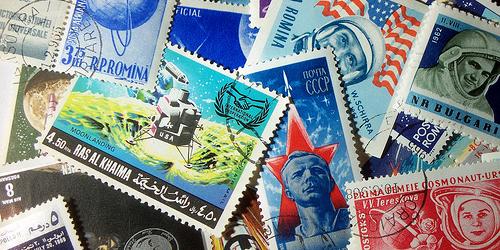 Millions of unused stamps, vintage space related stamps, books about stamp collecting, and other miscellaneous items are listed, bought, and sold daily. In 1995, a simple broken laser pointer started the eBay culture where millions of items are bought and sold daily by people around the world. Great finds and one of a kind items are available on eBay...with treasures around every corner. Start searching on eBay today...who knows...you may find the next great eBay treasure! It's free! So and start discovering stamp treasures today!
Copyright Encyclopedia Pokerpedia